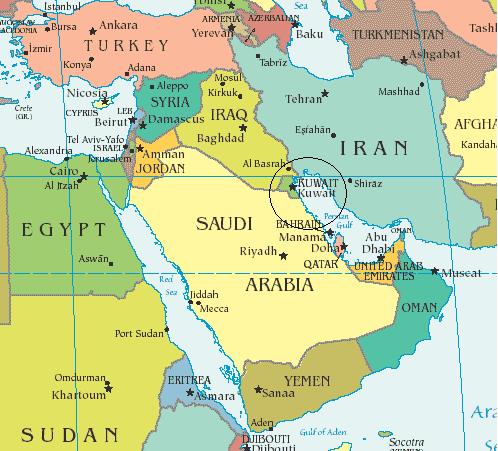 Kuwait is a small, oil-rich constitutional monarchy with 10% of proven world oil reserves.Foreign workers constitute approximately 90% of the labor force.Kuwaiti citizens constitute only 34% of the country’s population of 3.1 million, and enjoy the benefits of a generous social welfare system that guarantees employment, housing, education and medical care.Facilities for travelers are widely available.cultural activities, trade fairs, etc.

The official language in Kuwait is Arabic, though English is widely spoken and used in commercial circles. All official correspondence with government ministries and bodies must be in Arabic.

Islam is the state religion, As a result, all Islamic holidays are officially observed. The holy month of Ramadan is one of the most important months of the year. During Ramadan, Muslims fast from sunrise to sunset. Muslims and Non-Muslims are required to refrain from consuming food, beverages and smoke in public. Working hours are reduced during the month.

Due to the location of Kuwait in the Sahara geographical region, the weather of the country is characterised by long, hot and dry summers and short, warm and sometimes rainy winters. Dust storms almost always occur with a rise in humidity during summer.

The total population of Kuwait has reached an estimated 2,335,648 which includes 1,291,354 expatriates. The expatriate population is truly international with significant population of non-Kuwaiti Gulf Arabs, Egyptians, Iranians, Lebanese, Pakistanis, Europeans, and Americans etc.

Kuwaiti dinar is freely convertible and there are no restrictions on overseas remittances. Kuwait is served by modern banks, which offer all normal banking services. International credit cards are generally accepted by major businesses.

Almost every commodity is available in Kuwait. There are traditional souks (markets) and ultra modern shopping malls, with a new mall, ‘Al-Qout’ in Fahaheel. Many high street outlets from the US, UK and Europe are found in the malls including BHS, Boots, Debenhams, M&S, Sears, Next, Benneton, Body Shop, Starbucks, Carrefour etc.

Stores such as Next, Marks and Spencer, British Homes, Mothercare, Boots, Debenhams are available.

Details of Embassies can be found at the following website:

A number of Christian churches with English services are organized in Kuwait, including: The National Evangelical Church – St. Paul’s Church, the Catholic Church, Church of Our Lady of Arabia, the Seventh Day Adventists, and the Church of Jesus Christ of Latter-Day Saints.

Most mail is not delivered to homes but to Post Office Boxes. You can receive post via the school’s PO box. Some people, however, choose to have their own box for added convenience and reliability. This is not expensive (about 7 KD per year) and can be easily arranged once residency formalities are complete.

Air mail delivery of letters from the US and UK requires ten days or more, and delays of a month or more are not uncommon. Express mail and courier services are available; Armex, federal Express and DHL all offer services to and from Kuwait.

One of the most important monuments in Kuwait. KD1 ticket to viewing towers which give a spectacular view over Kuwait and the sea (or free viewing if you eat in the restaurant or coffee shop).

The Skating rink in Kuwait is one of the biggest skating rinks in the Gulf and the Middle East. Consists of a Big Rink, a Small Rink, a cafeteria for snacks (McDonalds, Swensen’s, Good Food), a shop selling sports wear and skating necessities.

The Entertainment City is an extraordinary structure, decorating the Doha area, and is located at the North West side of Kuwait, on a one million squared meters area. It’s the city of entertainment, city of dreams, city of Sinbad and Ali Baba, city of the thunder and the hurricane, city of the roller coaster, the African boat, and fantasy cinema.

A significant touristic landmark overlooking the sea offering a number of water games such as the fast spiral water, kamikaze pools, artificial waves, and others for children and adults. This is the latest water resort in Kuwait equipped with water slides, wave pool, swimming pools, play grounds, and restaurants. Located on the Arabian Gulf Street beside Kuwait Towers.

An English speaking Amateur Dramatics theater in Ahmadi where you can attend plays, audition and participate in productions or attend their social events. Check the website for more information on productions and events. Website: www.theklt.com

The Grand Mosque, opposite the Seif Palace, is an example of several traditional Islamic styles using modern technology while retaining the local characteristics of Kuwait as well as preserving the Islamic tradition of calligraphy.

The Scientific Center has the largest Aquarium built in the Middle East and visitors can view animals and wildlife found in regional habitats of the sea, coasts and the desert. It also has the IMAX cinema for 3D films, a ‘Discovery Centre’ for children, a Dhow harbor (with a traditional Kuwaiti boat), a coffee shop and fast food outlets. It is located on seafront on the Arabian Gulf Street in Salmiya.

Located in Omariya open everyday except Saturday, but closes in mid summer.

The Green Island is an artificial form of land, conquered and reclaimed from the sea containing an artificial blue lake, made out of sea water, showing the high tide and low tide phenomenon, as well as an open Roman-style theater. It has a 35 meter high tower, which makes a fantastic view of the green landscape and is, specifically designed for walkers. Many tournaments are held at the green island because of its massive size and the availability of a well-equipped stage.

There are many small privately owned health and fitness clubs, but many of the major hotels offer excellent health and leisure memberships with classes for various exercises and activities.